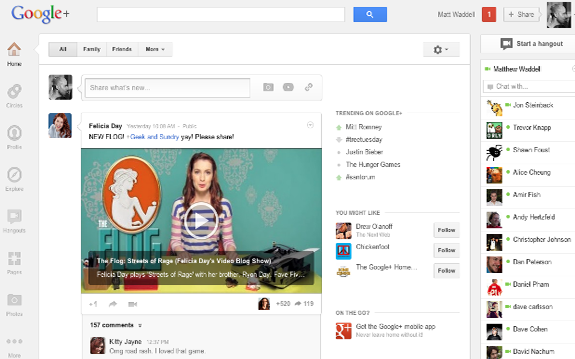 The battle for dominance in social media networking between Facebook and Google+ has taken another turn as Google stole their rival’s thunder with an unannounced facelift update.

Facebook had invited movers and shakers in the social media world to the unveiling of some unspecified changes to the site for March 7, 2013.

But Google+ leapt in to steal the headlines by unwrapping a new look for Google+ only hours before the Facebook event.

The Google+ updates include:

“Everything’s rolling out gradually, so check back soon if you don’t see it yet. Once it’s live, let us know your thoughts,” said McKinley.

Meanwhile, Facebook is looking at the first newsfeed update since 2006 – with rumoured multiple feeds, larger images and image-based adverts.

So Google+ has won this skirmish, but which site is winning the war?

Facebook users still outnumber their Google+ rivals. Facebook reckons to have more than a billion accounts, while Google has around 100 million.

But accounts do not necessarily add up to regular users.

Both networks have strengths in different regions as well – Facebook is big in the US and Europe, but Google+ and other regional networks take the lead in Asia and South America.

As an SEO professional, ignore Google+ at your peril as setting up an active account has shown traffic increases by up to 350%, according to research by inbound marketing firm HubSpot.